How to get to Zoo Lake

“a Park for the People”

The Zoo Lake is situated in what is originally known as the Herman Eckstein Park. In 1904 the land which includes both Zoo Lake and the Johannesburg Zoo was ceded by means of a Deed of Gift..."in trust for the inhabitants of Johannesburg...to be used for the purpose of a public park". The Zoo Lake covers an area of 46.6 ha. The Coronation Fountain was built n 1937 to commemorate the coronation of King George VI. The first boating licence was awarded in 1911. The Bowling Club and Sports Club were established in the early'30's. The land was donated to the city by Herman Eckstein who stated that the park around the lake should be “a Park for the People” Zoo Lake is therefore a place where people representing all races, cultures and creeds can be together in harmony with nature.

The park hosts a range of musical, sports, family and cultural events throughout the year

The centre of park activities is the lake with it's adjacent walking paths and lawns. Families and groups gather all week long to enjoy this public space 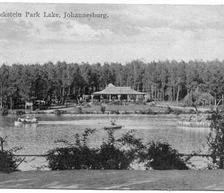 Family fun in the park